If you have wandered in the dark world of Instagram, I’m sure you have come across the two creative ladies Laura Prieto-Velasco known for her Hunter Gatherer Jewelry, and Lakshmi Ramgopal also known as the musician Lykanthea. After they got to know each other and since became friends, they found it only natural to join creative forces when Lakshmi was to release her solo debut Migration this summer. Now they are launching a jewellery collection together. In that regard, we wanted to get to know the two dark artisans, and hear some more on what inspires them – and what to expect in near future. Laura on the left, Lakshmi on the right.

First off, could you tell us a bit about yourselves, and how you got to know each other as artists?

Lakshmi: I’m a musician in Chicago, IL. I’ve been a member of various bands in Chicago for a decade or so, but I’ve only recently begun writing and performing under the solo moniker Lykanthea. I learned classical South Indian music, flute and violin as a child, but I came to music seriously only as an adult when I realized it was the best form with which to communicate my ideas.

I discovered Laura’s work on Instagram in summer 2013. Her work spoke to me right away, since it conveys a stark, strong beauty that was consistent with the themes I was developing for the EP. I got in touch with her to see if she could loan some of her pieces for photo shoot I was organizing, since I needed some press photos for the EP. I hadn’t written a note of the EP at that point, but her response to my ideas was warm and supportive. It was through that shoot that we became friends and collaborators. Laura’s ideas about the creative and destructive, which are drawn from her long experience as a metalsmith and which were shaping her Exitium collection, helped me to think more clearly about the EP’s visual world. Working with Laura quickly became more than styling photo and video shoots, and became instead an artistic and intellectual exercise about how physical objects can become records of the process of acquiring self-knowledge and provide new meaning and context to sound.

Laura:  I’m an artist and educator based in Chicago with a background in metalsmithing and design. I’ve been involved with several facets of these fields over the years and recently began making ready to wear leather and metal accessories under the label Hunter Gatherer.

Lakshmi initially contacted me though my Instagram page and asked if I might be interested in styling a shoot for her upcoming solo album. We began by exchanging visual inspiration in a shared board on Pinterest and found that our work intersected conceptually in some really interesting ways. At the time I was developing work for “Exitium” which was inspired by the brutality of physical and conceptual death as a necessary part of living processes. After meeting Laks and learning more about her expertise of the ancient world’s interpretation of these same concepts I realized this connection was really special and knew in my gut I had to work with this amazing human being. We also really clicked as friends, and have been relentlessly supportive of each other. I don’t know, I just believe in her and I think she believes in me too. 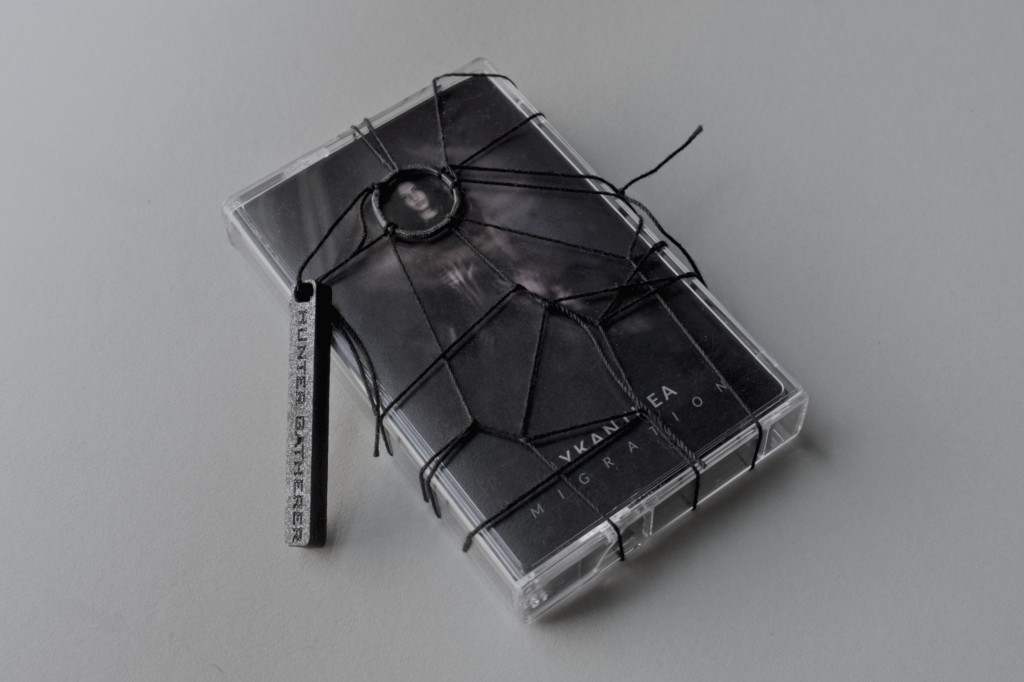 What was Lakshmi’s inspiration when making her solo debut Migration? How did you come to choose the goddess Inanna as a concept for your music?

Lakshmi: I knew last winter that I had an album in me that needed to be written and shared, but I didn’t know what would be its marrow, its narrative backbone. Then I discovered Inanna’s story, which is inscribed as a series of hymns in cuneiform script on four-thousand-year-old tablets from the kingdom of Sumer in ancient Mesopotamia, soon after the death of the folklorist Diane Wolkstein. I had met Diane briefly at a wedding in Dallas a few years ago, but what I did not learn until her passing was that she had collaborated with a Sumerologist to translate and arrange these cuneiform tablets for a project that culminated in her book Inanna, Queen of Heaven and Earth. I had an epiphany as I read about Wolkstein’s book: this was the story I was looking for.

The hymns she translated and arranged describe the life of Inanna as she grows from a girl into a powerful goddess and queen, dies, and returns from death. Her journey to and from the underworld was compelling, since she is described as struggling to enter it, finding herself trapped there, then ultimately escaping. At each stage of this journey, she undergoes physical transformations that reflect personal change and new insights into herself. The complexity of the text, the descent into and out of darkness it described, and its triumphantly thoughtful narrative, struck me as a challenging and rewarding way of exploring ideas about change. Interestingly, Inanna’s life-altering descent into darkness came to mirror a number of difficult experiences I underwent in the year I spent writing and recording the EP, so the choice of text was fruitful in many, many ways. 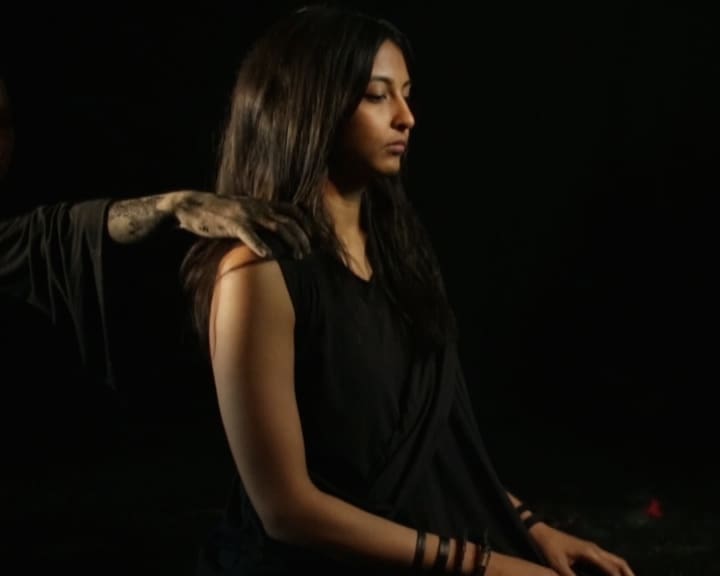 Behind the scenes on Lykanthea’s music video.

I wrote much of the EP while I was in Greece last fall doing dissertation research and, in particular, on the mostly uninhabited island of Delos. While I was there, I was cut off from the rest of the world – I had no phone or internet access. The quietness of the island and the roar of the waves around me put me in a unique, meditative state that is reflected in the EP’s ambient, dreamy tones. While in Greece, I also made time to visit exceptionally ancient places, like Mycenae, to see if I couldn’t recapture the knowing silence that the ruins there seem to have.

Migration is the first of several releases based on these texts about Inanna. Something I’ve learned over the course of researching my doctoral thesis is that one comes to new and different understandings of texts and art by revisiting them over time. I also experienced this while working on the EP. Random life events would unexpectedly illuminate parts of the hymns which had made no sense to me or which I previously had not found interesting. As my understanding of the tablets grew, so did the sense that I didn’t understand them at all. So my goal is to return to Inanna’s story intermittently to see how I respond to it and the idea of personal transformation in song form. My guess is that my reaction to this powerful text will change in tandem with my own growth and development as a person. That said, I don’t think my next release will be based on Inanna’s story, since I want to return to the text with fresh eyes. Nor am I sure how many Inanna-related releases there will be in total. But the texts exert a hold on me that I’m sure will last a long time. Laura, could you tell us about the jewellery you have created earlier? How was the creative process with Lakshmi towards the finalization of the collaboration collection?

Laura: The jewellery I created was a mix of one of a kind cast bronze and hand hammered sheet metal designs with a matte black powder coat finish paired with whip-like accessories made out of salvaged leatherwear collected throughout Chicago. My creative process usually starts with something or someone that deeply inspires me. I start by creating a set of abstract personal goals to keep me motivated and interested in the work as it is created. In this case I was initially inspired by cycles of creative and destructive processes intrinsic to social and natural phenomena; which are more evident during Chicago’s harsh winters. My overarching goal was to develop a ready to wear unisex collection that allowed me to explore one of a kind processes through a limited production series. 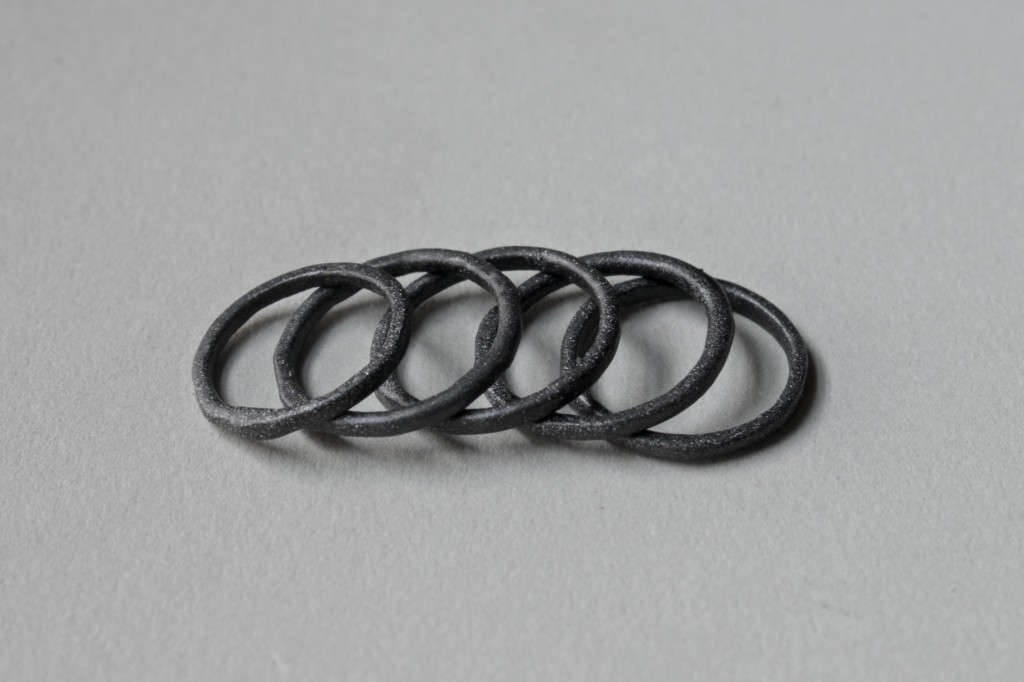 Migration Tape Collaboration Rings used in the packaging of the EP.

Previous to Exitium, my first collections were designed in a very linear way. I would begin with a set concept, develop sketches and finalize these ideas in finished products. I found this approach to be extremely limiting and often times I would become frustrated and disenchanted with the outcome and want to destroy everything and start again because it did not meet my standards.

For my own practice and teaching I think it is crucial to allow for the creative space to respond to the work as it was being created including editing the work as it is being made. Over the years I have destroyed many pieces due to this critical nature, but it is all part of the process. Having been working as an independent creative professional for over a decade, inviting others into my personal vision during the formative stages is certainly not an easy thing to do. However, I have found that when the collaboration is a good fit, the other person’s influence and objective perspective significantly strengthen the work. Special individuals, such as Lakshmi and a few others, have a particular kind of creative energy that is so intoxicating and inspiring that I can’t deny that my creative shell needs penetrating every now and then. They have become extremely important agents in the development of my work by contributing to and contextualizing my ideas in ways I would never have expected.

Currently we are working on a collaboration of limited edition pieces incorporating interpretations of lyrics from Migration into unisex cuffs in a small capsule collection. We recently released a test collaboration which featured the creation of limited edition cassettes of Migration wrapped in custom Hunter Gatherer Packaging. Though we have worked together on visual projects before, I would say this is our first attempt to fuse our practices together in a physical object that people will hopefully connect with as well as incorporate into their personal styles. We plan to release them in early October, 2014 via Hunter Gatherer’s online shop. Thanks to Lakshmi and Laura for letting us get a glimpse into their creative minds, and for giving us some really interesting views on a collaboration process. I’m so glad there are small independent and dark artisans to drape the world in their beautiful shadows – just like Hunter Gatherer Jewelry and Lykanthea. Be sure to support them!

You can listen to, and download Lykanthea’s Migration EP over at Bandcamp!